Vacation and travel by Maspalomas

Holidays in Maspalomas on Gran Canaria

In the south of the Spanish isle Gran Canaria at the Atlantic coast you can find the interesting town Maspalomas, a part of the municipality of San Bartolomé de Tirajana.

With a population of about 33,000, there is a lot of tourism at this great place with its beautiful beach and attractive sand dunes, shopping centres, restaurants, bars, taverns and other facilities.

It is a wonderful place for everybody longing to relax at a great holiday resort where the sun shines almost every day of the year, with mild water and lots of sports and spare time activities.

Travellers should not miss the 68 m tall lighthouse “El Faro de Maspalomas” situated at the southern point.
The oasis ”La Charca“, which is a breeding place for water birds, can be found there, too.
You can walk along the 12 km long awesome beach of Maspalomas as far as Playa del Inglés, or try to get a horse or a camel for a ride.

Snacks and drinks can be had at the kiosks along the beach, whose sand consists of pulverized coral lime and sedimentary rock strata that was washed ashore by the waves. The dunes of 6 km length and up to 2 km width are a nature reserve, and there is also an official beach for nudists in the dunes.

West of “El Faro“, there is a wonderful promenade of the newer part of the town where you can find Cafés, shops and boutiques.

Costa Meloneras is a place with a number of big hotels in Maspaloma’s south western part, and shopping centres and the convention center can also be found there.

If you are a golf fan, you should go and spend your holidays in the middle east part with lots of bungalows and a golf course area at the "Campo International”.

If you prefer smaller hotels, however, you should go to “Sonnenland” in the north western part of the town. Sonnenland was originally designed for tourism, but more and more Spanish residents have settled there meanwhile.

“El Hornillo“ in the western part of the town provides an area for the wealthier inhabitants. In the north you can find „El Tablero“, where most hotel workers live.

Last not least you should also visit the special attraction Palmitos Park north of Maspalomas about 10 km away, and there are other amusement parks in the surrounding as well. The Palmitos Park near Maspalomas is a beautiful botanical garden with an orchid house, which also acommodates monkeys, crocodiles, an aquarium with different species of fishes and coral displays, and Europe's largest butterfly house.

The biggest event in the year is carnival (later then the rest of Europe), and the Maspalomas Pride. The pride is especially for gay people. The carnival parade is one of the biggest party's at the island. I liked the party after the parade at the yumbo shopping centre, called "fiesta de la noche". Had much fun.

The Dunes of Maspalomas

The Dunes in the south of Gran Canaria are a wonderful nature reserve.

One of the most breathtaking areas to visit are the sand dunes of Maspalomas, which will truly make you feel one with the nature. Measuring over 400 hectares, the natural reserve is a popular attraction, which is never being overcrowded.

The amazing Dunes of Maspalomas

The region is noteworthy, as it boasts some unique plants and species of animals that are native to that area and show ties to Africa.

The lagoon of Maspalomas, which is located in the middle of the dunes, is a major bird nesting center and popular for nature lovers and bird watchers.

The contrast between the dry, yellow coloured dunes that touch the horizon and the blue ocean beyond is truly spectacular and the dunes offer some of the best and most unique hiking opportunities on the whole island.

Recently, tourism has become a bit of a problem, but great measures have been taken to preserve the fauna and flora while allowing a tourism with it's limit. 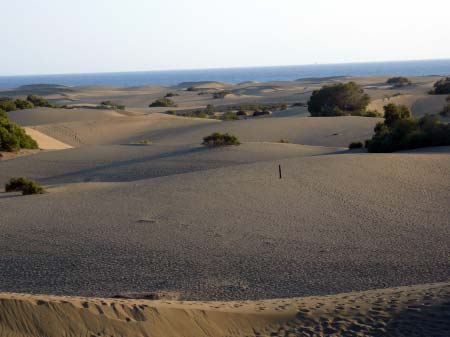 Walk through the Giant Dunes in the evening

Walk through the Maspalomas Dunes
at a cloudy day with calima 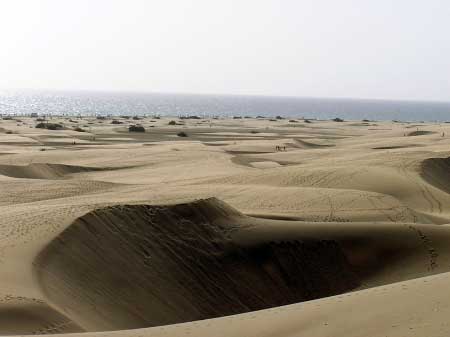